The Environmental Indicator Report 2014, was set up by the European Environment Agency (EEA) to evaluate such measures, focusing on Food, Clothing and Electric and Electronic Goods. This report appoints Eco-innovation and Eco-design as crucial transition factors that hit at how sustainable production and consumption patterns might look in the future, as more than 80% of the environmental impact of a product is defined at the design stage.

Furthermore the Bruges Communiqué on enhanced European Cooperation in Vocational Education and Training for the period 2011-2020 says that ‘…the transition to a green economy is a mega trend which affects skill needs across many different jobs and sectors’.

The EEA Report 2014 indicates some opportunities in education for the change to a sustainable production-consumption systems like educating designers on their choices implications across the product life-cycle. This could include raising awareness on the pressures associated with different raw materials. It could also include training on how selecting materials and increasing the reuse potential and eventual recycling.

The 3rd report of EEA (Environmental Impacts of Production-Consumption Systems in Europe) indicates that the EU economy is highly dependent on trading with the rest of the world. Electrical and electronic goods, clothing and food are production-consumption systems with globalized supply chains and large shares of imports to the EU economy. Production of these goods in Europe still contributes considerably (but decreasingly) to gross domestic products (GDP) and jobs, while these sectors continue growing in many less developed countries.

If the production stage is more often being carried out abroad, the design phase is mainly undertaken by European designers.

The overall objective is to highlight ways that production-consumption systems can be adjusted to augment societal benefits and minimize societal costs.

ECOSIGN is a Sector Skills Alliance co-funded by the Erasmus+ Programme of the European Union, that started on 1st November 2015 and will end on 31 October 2018, aiming at creating an Eco-Innovation Skills partnership in four European countries (Slovenia, Spain, Romania and Italy) addressing the lack of knowledge of designers coming from the three economic sectors in which the Environmental Indicator Report 2014 focuses: food packaging, electronic goods and textile/ clothing.

ECOSIGN will allow industrial designers from those sectors to reduce environmental impact during the product life-cycle from the earliest stage of design, including the use of raw materials and natural resources, manufacturing, packaging, transport, disposal and recycling, avoiding the risk of uncoordinated product planning that could lead to a negative impact for the environment (for example, eliminating a toxic substance should not lead to higher energy consumption).

The main results of this alliance will be a new joint curriculum and a training course for European eco-designers that will add skills and competences to the designers regarding environmental technologies. Also, it will allow designers, from one specific sector, to change their industrial activity to other sector.

ECOSIGN aims and objectives will contribute to the Agenda for New Skills and Jobs, an EC initiative for reaching the employment target for 2020 by equipping people with the right skills for the jobs of today and tomorrow and improving the conditions for job creation.

As the theme is very wide and it’s needed a multi-sectorial perspective, the partners of the project are from different countries specialized in eco-innovation in different sectors, as research centres and associations, educational providers or authorities like VET centres or independent certification bodies.

Institute Of The Republic Of Slovenia
For Vocational Education And Training

Newsletter n. 5 – State of the art of Ecosign project after 18 Months of activity

In the Newsletter attached, the main results achieved in definition of content and some goals for the next months are defined.

As from November 2017, the experimental phase of the ECOSIGN project will be kicked off with the implementation of “Pilot Cases experiences”, which will test the training paths developed by partners for the following sectors: food packaging, electric & electronic goods, textile & clothing, students or professionals interested to test this course can fill in the attached form and send it to info@ecosign-project.eu

Fourth International Meeting Of The Ecosign Project In Murcia

Between 9th and 10th May 2017, the fourth international meeting of ECOSIGN project partners was held in Murcia within the frame of the eighth International Symposium on Food Technology and Food Brokerage Event.

ECOSIGN partners outlined the progress made during the first 18 months of the project and considered activities for the next six months to reduce the environmental impact during the product life cycle, including the use of raw materials and Natural resources, disposal and recycling.

ECOSIGN will end on 31st October 2018 with the design of a new joint curriculum and training course for European Eco designers who will bring skills and competences to designers in relation to environmental technologies. 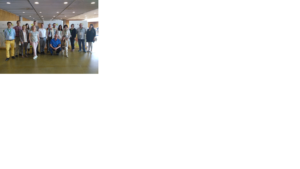 On 14 March 2017, members of the European Parliament (MEPs) voted to demand that the share of waste in the EU should be recycled up to 70% by 2030, from the current figure of 44% under the draft legislation that has been proposed by the European Commission (http://www.europarl.europa.eu/news/en/news-room/20170308IPR65671/waste-boost-recycling-cut-landfilling-and-curb-food-waste-parliament-says).

This is an important step to try to reverse the trend to increase the use of raw materials by the adoption of a circular development model which keeps materials and their value in circulation.

With the 3 “R” “Re-use, Recycling and Recovery” waste will cease to be a problem and instead become a resource. By 2030, at least 70% by weight of so-called municipal waste (from households and businesses) should be recycled or prepared for re-use, (i.e. checked, cleaned or repaired).

For packaging materials, such as paper and cardboard, plastics, glass, metal and wood, MEPs demanded an 80% target for 2030, with interim 2025 targets for each material.

The issues voted through on 14 March 2017 represent the European Parliament’s negotiating position, ahead of negotiations with the EU Council of Member State ministers, which has yet to adopt its own position.

Regarding one of the materials mentioned above, namely plastics, the European Commission has already published a roadmap that is expected to result in the publication of an official Communication on a strategy on plastics in a circular economy by the end of 2017. Its aim is to inform stakeholders about the Commission’s work in order to allow them to provide feedback and to participate effectively in future consultation activities.

The text is available at the following link: http://ec.europa.eu/smart-regulation/roadmaps/docs/plan_2016_39_plastic_strategy_en.pdf

Newsletter n. 4 – A New generation of Designers: the Eco-Designers

Which are the competences and skills needed by Designers to be considered ECO-Designers? read the newsletter attached.

The 12th annual Conference of the European Technology Platform for the Future of Textile and Clothing will take place in Brussels on 30-31 March 2017. The focus of the event will be “Textile Research in HORIZON 2020”. On the first day of conference there will be 2 sessions dedicated to Sustainability: “Circular Economy” and “Resource Efficiency”.  that will see the contribution of Ms Daniela Nebuloni, Centrocot, that will present Ecosign project with a lecture regarding “Ecosign: Green jobs, new skills for sustainable competitiveness”. The draft programme is available at the following link

What does industrial design mean? How can we introduce eco-design in this discipline?
See these 3 interesting and attractive videos to find out more:

The MURCIA FOOD BROKERAGE EVENT 2017  will take place in Murcia on 9-10 May 2017. This is an international event that will present the latest innovations in the field of Food Technology and where companies from different countries will have the opportunity to meet and to find new ways of partnership.
On the same days, it will be held the “VIII Food Technology International Symposium” with lectures and presentations of the latest news regarding the food sector. It is also foreseen a specific session about Circular Economy that will see the participation of Mr Roberto Vannucci (Centrocot) with a lecture regarding “Principles of Circular Economy and EcoDesign. Ecosign Project”

Ecosign: A useful tool for designers to enhance their contribution for a sustainable circular economy

Attached an article about Ecosign project published on the January 2017 issue of Tex Innovation, a magazine focused on Technical & Innovative Textiles.

Newsletter n. 3 – The role of design in the production process planning

In the Newsletter n. 3, it will be discussed the contribution of design to production planning as a contribution to sustainability and the enhancement of Circular Economy in the textile & clothing sector.

The present work, produced by the ECOSIGN Consortium, is licensed under a Creative Commons Attribution-NonCommercial-NoDerivatives 4.0 International License.